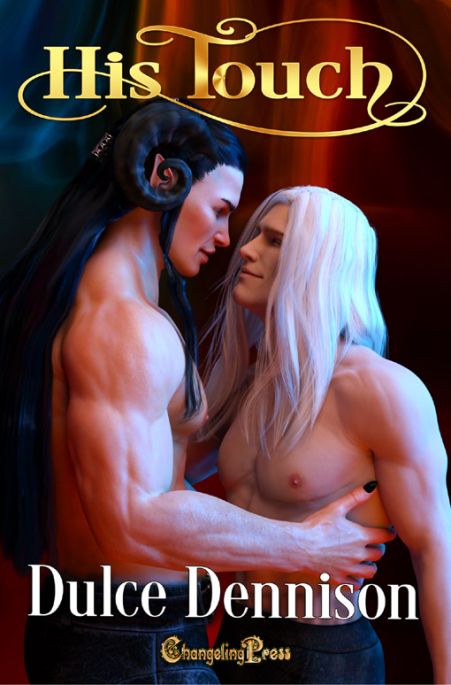 Pyk doesn’t fit in with the light Fae, no matter how hard he tries to conform to the ways of his people. He craves things, dark things, that no light Fae should ever think about, much less desire. At four hundred years old, he thinks he should have things figured out by now, not still feel like he doesn’t belong. Until the day the dark forest calls to him…

Prince Llewellyn was banished from his home long ago, his deformities too much for even the dark Fae to handle. Nearly forgotten, he’s lived in isolation for five thousand years. Stories of the monstrous Fae prince have become fodder for nightmares to scare Fae children into obedience. But Llewellyn lives, and he’s lonely. When a light Fae comes to him, Llewellyn demands that Pyk bow and submit. He only means to keep Pyk long enough to ease the ache of being alone — he doesn’t count on falling in love.

Magick swirled through the air as spells were thrown with arcs of color and light. Pyk scowled at the juvenile behavior as a puff of pink smacked him across the face, the magick settling over his skin and leaving tingles in its wake. He shook it off before trudging across the field. Magick pelted him, making his temper spike with every spell. It was wasteful, and was going to draw the wrong kind of attention to their small gathering.

A breeze teased the tall grass and made the leaves rustle. His gaze was drawn to the dark forest, a place where monsters and evil lived. Even the bravest of souls who entered were never seen again. It was said that a beast lived in the forest. Eyes black as pitch, horns the color of brimstone, and a soul that was badly damaged. Young light Fae were told to never enter the forest or the monster would eat them, bones and all.

Pyk was too old for such stories, but there was something sinister about the dark forest. Whispers reached his ears, a calling that was hard to ignore, as the voices beckoned him closer. He’d taken three steps toward the forest before he jolted back to awareness. Unease skittered down his spine, a feeling of dread overcoming him, as if he were being watched. Nothing moved from within the forest, and no animals made a sound. It was said that any creature who survived the dark forest became twisted and evil, like the monster who ruled over the territory that lay in shadows and mist.

A glance over his shoulder let him know that no one else was wary of being so close to so much danger. They laughed and played, acting as if they were ten and not two hundred. Part of him envied them. It had been so long since he’d felt carefree. When was the last time he’d played or had fun of any kind? They joked and called him an old man, but Pyk wondered if maybe he had aged before his time. He was only four hundred, still quite young, but being different from the others had given him more of a cynical view of the world. He knew if any of the light Fae knew what he really desired, they would shun him.

The whispering grew stronger, drawing his attention back to the forest. Tendrils of black smoke danced and reached for him, pulling him closer. His heart thudded in his chest and his mind screamed for him to back away, and yet his feet carried him closer. The sounds of the laughing Fae behind him dimmed as the whispers grew more insistent.

The forest was closer than ever before, the darkness luring him in. A scent teased his nose, something rank and rancid. The stench of rotting flesh made him gag and he stumbled back a step.

A black, clawed hand reached from the darkness, wrapped around his wrist, and jerked him into the forest. Pyk stumbled and fell to his knees, the decaying leaves of the forest crumbling under his weight. His gaze lifted, following a pair of black leather boots, pants that molded to strong thighs and an impressive bulge, and a shirt as dark as the endless night sky. Despite the fear he felt, his cock responded to the pure strength in the male standing over him. Looking further up, all he saw was darkness where a face should have been, and the glow of red eyes. Horns curled toward the canopy, tipped with silver metal.

He should run. Scream. Do something to get away, but there was a pull he couldn’t ignore. His cock throbbed in his pants, and he wondered what sort of spell the creature had cast over him. Other than the horns, claws, and strange face, his captor had the body of a Fae. Stronger than most, broader perhaps. Beautiful. Pyk stared at the expanse of the creature’s chest and he wondered what it looked like under all the black clothing.

The claw-tipped fingers tightened on Pyk’s wrist and the creature began dragging him through the dark forest. Pyk stumbled to his feet and trailed after the figure, his magick sparking then fizzling at his fingertips. Fear pulsed through him, combating his growing lust, and he reached down deep, trying to pull from the well of his magick to no avail. Either his fear was too great, or the creature held some sort of power over him.

Darkness closed in around them as twigs and leaves crunched under their feet. The air grew colder, and there was silence around them, as if even the twisted creatures who lived in the forest were afraid of whoever was holding him captive. As much as Pyk wished he was back in the field, he still felt a pull he couldn’t ignore. A mixture of curiosity and desire spiraled through him as he tried to study the figure hauling him through the forest.

A clearing came into view, and with it a tall castle. Pyk would have frozen in place had the dark figure not been dragging him along. The gray stone structure reached toward the sky, shadows clinging to it, vines climbing the sides. The massive doors opened as they approached as if welcoming their master home, and Pyk wondered if his life was about to end. Being led to the evil being’s lair couldn’t be a good thing.

The stones under his feet absorbed the sounds of his boots as he crossed the threshold. As they trudged further into the castle the doors behind them swung shut just as soundlessly as they had opened. It was an eerie feeling, and Pyk couldn’t shake the sensation of his skin crawling. Magick swirled through the air, dark and heavy, its hands twisting and reaching for him. The mysterious creature led him further into the castle, the halls seeming to bend and move on their own. Another set of doors opened as they approached, and the creature dragged him further inside, climbing steps to a dais.

Pyk was released and nearly fell face-first onto the floor. He landed on his knees, and waited for his fate. The figure sprawled across a wooden throne, and with a wave of a clawed hand, light illuminated the room they had entered. As the warm glow bathed the creature, the shadows of his face cleared and Pyk was struck dumb by the handsomest Fae he’d ever seen. The red eyes changed to a silvery gray, and as more of the creature’s cloaking spell cleared, Pyk realized he was looking at a dark Fae.

Long black hair cascaded over the Fae’s shoulders, and slightly pointed ears peeked through the strands. The horns remained, and Pyk realized they weren’t part of the illusion. The Fae’s hands really were tipped with claws, even though his fingers looked normal otherwise. Pyk had never heard of a Fae surviving in the dark forest, and now instead of being afraid, he was intrigued. His gaze scanned the figure, and he bit his lip at the bulge that still pushed against the male’s pants. It seemed the desire he’d felt wasn’t one-sided…